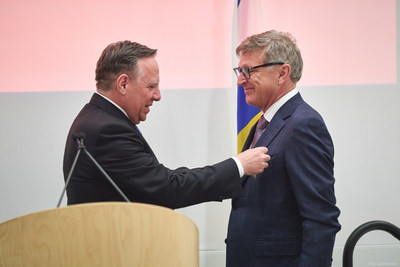 "It is truly an honour to be appointed to the Ordre national du Québec and join the ranks of pioneers who have been recognized for their significant contributions to Québec's economy and growth," said Mr. Parent.

Since joining CAE in 2005, Mr. Parent has led CAE's growth beyond creating simulation products to providing solutions, services and technologies that enhance human performance in high-stakes industries while always looking for innovative ways to give back to Québec.

Over the last two years, Mr. Parent's advocacy and leadership helped CAE strengthen its business strategy and secure its future despite the challenges of the COVID-19 pandemic.  With nine acquisitions since March 2020, CAE has also significantly increased its capabilities and expanded its offering, ushering in the next generation of technology.

Committed to building technology to accelerate the development and safe adoption of world-changing innovations, Mr. Parent contributed to making CAE the first Canadian aerospace company to become carbon-neutral in 2020.

Recognized for his commitment to the community and an unparalleled passion for making the world a safer place, Mr. Parent launched a movement in Québec to accelerate vaccinations against COVID-19, which led to nearly 400,000 doses being administered in 27 centres to companies across Québec. Also under Mr. Parent's leadership, CAE employees designed and created the CAE Air1 critical care respirator.

For his extraordinary vision, ambition and leadership, Mr. Parent has also been recently inducted into Québec's Air and Space Hall of Fame, a non-profit organization that recognizes the outstanding contributions and accomplishments in aviation from individuals from Québec.

Over the years, Mr. Parent has been honoured with numerous other awards, including the Order of Canada (2020), Canada's Aviation Hall of Fame (2021) and being named Industry Leader of the Year by the Living Legends of Aviation (2022).

About the Ordre National du Québec

Every year, since 1985, the Premier of Québec has paid tribute to exceptional individuals who, through their achievements, values and ideals, have influenced Québec's growth and contributed to its renown. In 2022, Marc Parent was one of the 32 remarkable Quebecers to be appointed during the 36th award ceremony.

At CAE, we equip people in critical roles with the expertise and solutions to create a safer world. As a high-technology company, we digitalize the physical world, deploying simulation training and critical operations support solutions. Above all else, we empower pilots, airlines, defence and security forces, and healthcare practitioners to perform at their best every day and when the stakes are the highest. Around the globe, we're everywhere customers need us to be with more than 13,000 employees in more than 200 sites and training locations in over 35 countries. CAE represents 75 years of industry firsts—the highest-fidelity flight and mission simulators, surgical manikins, and personalized training programs powered by artificial intelligence. We're investing our time and resources into building the next generation of cutting-edge, digitally immersive training and critical operations solutions. Today and tomorrow, we'll make sure our customers are ready for the moments that matter. www.cae.com

Is the "Next Big Thing" Hidden in…