SAN FRANCISCO, April 30, 2018 /PRNewswire/ — Sentient Technologies, the world leader in artificial intelligence products based on evolutionary algorithms, announced today the expansion of its presence in Asia and Australia, with new partnerships.  Sentient’s newest partners, Intralink Group in Korea and Neural Digital in Australia and New Zealand, will be responsible for the continued growth of Sentient’s AI-based marketing and e-commerce products, including Sentient Ascend. 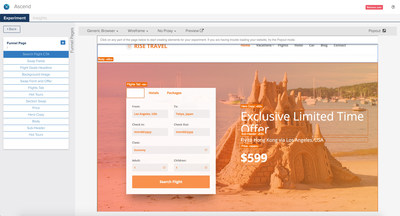 Serving customers in APAC since 2016, Sentient Ascend has already been deployed in Australia, Japan, Korea, Hong Kong, and Singapore. In early 2017, Sentient entered into an agreement with a division of Rakuten Marketing, LLC (Linkshare Japan KK) to provide Sentient Ascend to the Japanese market; these new engagements build on that partnership model.

“With on-the-ground presence in even more Asia-Pacific markets, Sentient will be able to better serve its customers and prospects,” said Jonathan Epstein, Sentient’s Senior Vice President of International. “We plan to continue our aggressive international expansion with additional partnerships planned for this year.”

Korea is one of the world’s most advanced digital markets, with $37B a year in online sales, making it sixth in the world. Sentient’s partner in Korea, Intralink Group, has a long track record of successfully launching new technology products into Asian markets.

“Ascend allows marketers and e-commerce operators to test vast numbers of design and code changes simultaneously, even across multiple funnels and in a tenth of the time it would take using traditional A/B solutions,” said Michal Witkowski, Director of Intralink.  “Given the fierce pace of competition in Korea’s rapidly growing ecommerce market, we needed a tool that could deliver faster and larger returns for our customers and we found it in Ascend.”

Australia is another leading region for ecommerce and digital marketing, with $23B – 10 percent of the overall retail market – now transacted online. Neural Digital, Sentient’s partner for Australia and New Zealand, is a consultancy that brings precision artificial intelligence-based solutions to marketing’s largest challenges.

“AI is now the killer tool for marketing teams wanting to maximize their productivity and leapfrog their competitors,” said Robbie Dalton, Cofounder of Neural Digital, “but many companies talk and don’t deliver. We’re focused on offering only AI solutions that deliver an immediate impact on a customer’s bottom line and Sentient Ascend tops the list.”

Ascend can be used to optimize websites, mobile sites and landing pages in any language and is being used for many different use cases.  Sentient will continue to select additional partners in other growth markets, including India, Southeast Asia, China, and Russia.